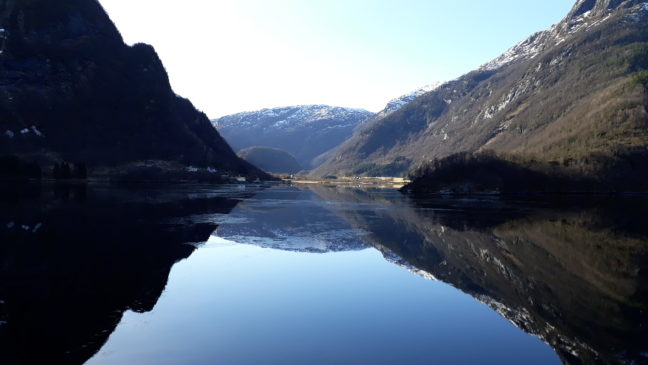 They tend to be long and deep, they have one or many sills, they are breathtakingly beautiful and they were carved by ice a long time ago*… I’m off course thinking about the Norwegian fjords! My teaching has brought me back into fjord oceanography (I wrote my Master’s about water mass transformation in a fjord on Svalbard), and last summer I had a little hobby-project trying to figure out how climate change would affect the renewal of the deep water in a fjord… and now that hobby-project is about to get published in “Estuarine, Coastal and Shelf Science”!

With time, the density of the basin water will decrease (as turbulence causes lighter water from above to be mixed down). The density of the water outside of the sill (at sill level) varies in time – e.g. because of wind blowing along the coast that pushes the dense water down or lifts it up– and at some point the water outside will be dense enough to flow into the fjord and replace the basin water and the basin water is “re-newed”. How often the deep water is renewed varies greatly between fjord systems – in some fjords the deep water would be stagnant only a couple of weeks while it may be many years between two renewals in others.  How long the water stays in the fjord depends mainly on two things: how quickly the density in the fjord decreases (the slope of the red line below) and how variable the density of the coastal waters are (the wiggliness of the blue line). If the density decreases fast, the interval between to renewals will be short, and if the ambient density is very variable, the interval will be longer (on average). If we  have information about the density decrease and the density variability for a particular fjord, then we can estimate how long it will be between two renewals (on average) and say something about the probability for very long stagnation period. Does that matter? Well, fish and other creatures that lives in the fjord consume the oxygen in the water, and the longer the water stays in the fjord the lower the oxygen concentration gets and the tougher it gets for the animals who live there to breathe. So yes, it matters, so fish (and others that care about the environment in the fjord) would want to know if the likelihood of deep water renewal is changing.

The Institute of Marine Research in Norway have hydrographical stations along the coast, that have been collecting salt and temperature data (from which one can calculate density) every other week (roughly) since the 1930s. The data show that the density typically is highest during spring and summer – and that after around 1990 the densest water is becoming less dense (on six out of eight stations). Superimposed on the ambient density variability, we have a negative trend (green line above). The trend is bad news to, for example, the fish living in the fjord basins, since the decreasing trend will increase the length of the stagnation period (fewer black arrows). In Masfjorden, for example, the statistical framework that I develop in my paper suggest that the fish would have to wait (on average) two years longer for new, oxygen rich water and that the risk of stagnation periods longer than 10 years increase by a factor of six.

The last deep water renewal** in Masfjorden probably occurred around 2011 (see below), and data from a cruise in June this year show that there has been no renewal so far this year and that oxygen concentrations now are around 2.3 mL/L. Unfortunately, my model cannot predict if there will be a renewal this year, only say something about the probability that the deep water will be renewed.

* or possibly designed by Slartibartfast?

** There has been partial renewals after 2011, where the upper part of the fjord basin is renewed.

One thought on “Directly from the press: Climate trends and deep water renewal in Norwegian fjords!”