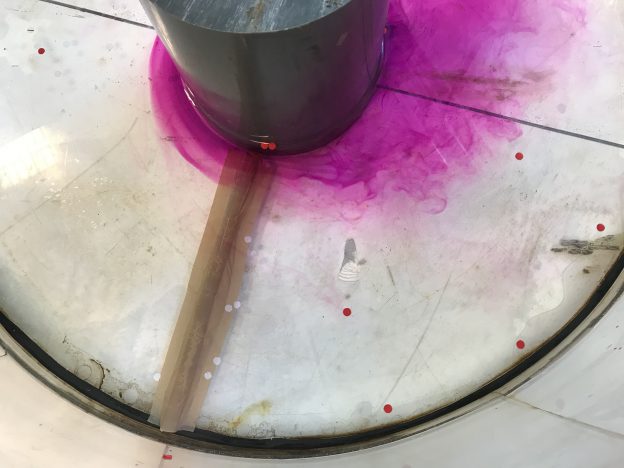 One experiment we wanted to run with the GEOF213 course this year were the Topographic Rossby Waves.

The idea is quite simple: We set a solid cylinder in the center of our tank and connect it with a ridge to the tank’s edge. The ridge is just a piece of hose that is taped radially to the bottom of the tank. We then spin the whole thing into solid body rotation. Once it is spun up, we add dye around the central cylinder. We then slow the tank down a tiny little bit, just enough so the water is moving relative to the tank and the ridge.

As the water now has to cross the ridge, it feels the water depth changing as it does so. A changing water depth results in changing relative vorticity to conserve potential vorticity, so the flow starts meandering. In the end, we felt like the experiment was too difficult to run to rely on it working out when presenting it in class. But that doesn’t mean that I have given up on it. I will conquer the topographic Rossby waves eventually, so stay tuned! 🙂