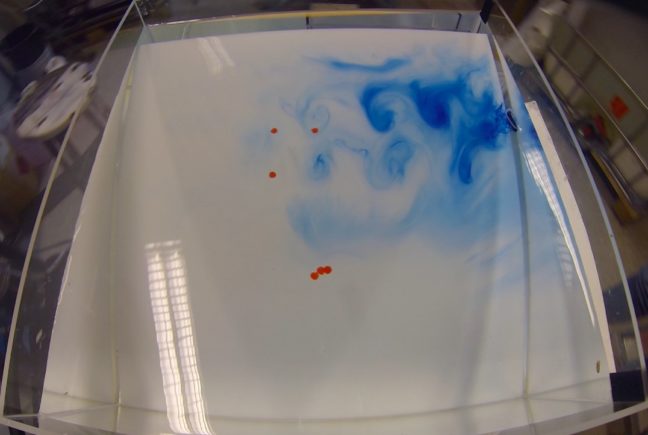 In the image above, we see planetary Rossby waves. They are propagating along the slope with shallow water to the right. But why? This is the kind of thing one might learn in GEOF213: “Dynamics of Ocean and Atmosphere”. This is theoretical subject, with equations filling the blackboard in most of the classes. To make it more fun, to help understanding of mechanisms and to motivate why a little theory really can’t be avoided, Elin and I (Mirjam) set up a couple of experiments over the last couple of weeks. Some working better than others, but that was to be expected…

But one that worked super well are planetary Rossby waves. We use a square tank with a sloping bottom which is spun up to solid body rotation. Then, a colored ice cube is placed in the shallow eastern corner of the tank. As it starts melting, a column of melt water forms below it. Because the melt water column is being stretched as it is sinking, it starts spinning. Once it reaches the sloping bottom, it is stretched even further. In order to conserve potential vorticity, it moves back up the slope again, starting to form a Rossby wave which then propagates westward.

Below you see an experiment both from the top (upper left corner) and the side.

What I find super cool is that the ice cube, sitting on top of its rotating Taylor column, spins in the same direction as the tank, but even faster than the tank itself! Physics says it has to, of course, but this is the kind of counterintuitive stuff that is just really nice to directly observe.

Here is another experiment, shown in real time.