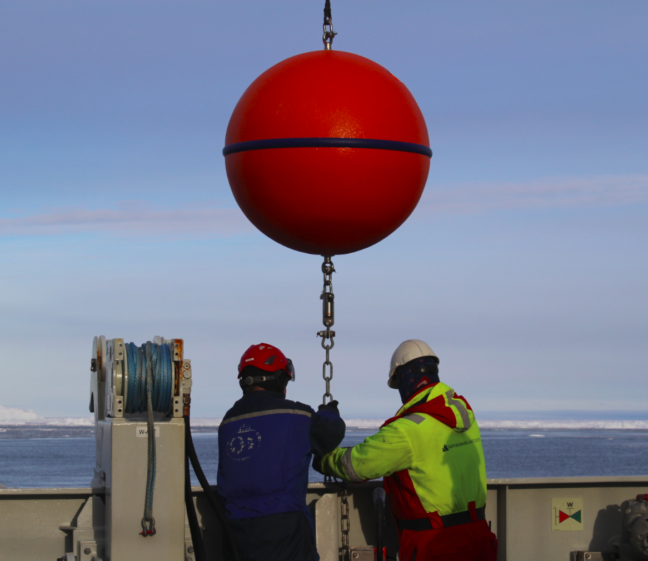 In the last blog post, Elin wrote that I called her with bad news from Dronning Maud Land, because the ice didn’t allow us to deploy the mooring. But what was actually our aim with that mooring? What did we want to learn? For that I need to tell you about the Southern Ocean and ice shelf ocean interaction…

The Southern Ocean is very important for the global system for different reasons:

Regarding the ice shelves, they are mainly melting because “warm” water reaches the ice. “Warm” in this sense is not really warm… It only means warmer than the freezing point, which can go Down below -1.9oC in salt water and under higher pressure at depth. It is very difficult to measure temperatures and currents under an ice shelf. But 10 years ago, one of our oceanographers on board, Tore Hattermann from NPI, went to the ice shelf Fimbulisen here in Dronning Maud Land to drill holes in the ice shelf and install moorings underneath. Since then, those mooring have been measuring temperature, salinity, oxygen and the current speed underneath the ice, where we otherwise can’t measure anything Those are really impressive data!

So what did Tore find out?
There are three different ways how warm water can reach an ice shelf (Hattermann et al., 2012):

However, the heat entering the cavity through those processes is relatively small in the case of Fimbulisen and the melt rate beneath  the ice shelf is low. But what does it have to do with our cruise?
We want to know, how the water masses in front of the ice shelf, at the continental shelf break change with time. Therefore we wanted to install more moorings that could measure the depth of the Warm Deep Water etc. Maybe the winds change with time and consequently also the currents? Also changes in the sea ice can change the density of the water and cause a change in water masses.

It would have been very interesting to study those processes in an area, where so good data from the ice shelf cavity and ice shelf melt exist. We were therefore quite sad, that we couldn’t reach far enough south due to the sea ice restrictions. Luckily, we managed to install two other mooring that the oceanographers from NPI brought, although we had to place them further north than intended. We’ll find out in two years if the data are interesting! And keep the fingers crossed that the instruments won’t get overrun by icebergs or break for other reasons!